Attending a Starcraft Tournament in Seoul

There are few countries as obsessed with video gaming as South Korea. Everyone, from infant to elderly ajusshi, seems to play games here. Just spend an hour on the Seoul metro and you'll find hundreds of commuters buried in their cellphones as they tap away at a game of Angry Birds or Anipang. There are PC-bangs (internet cafes where people play online multiplayer games) on practically every block in Seoul, and the country is the most wired in the world, with an estimated four million Koreans playing online games at any given moment.
This obsession runs so deep that there have been numerous stories of deaths caused by gaming addiction. In one high profile case from 2005, a 28-year-old man collapsed and died from organ failure after playing online games for over 50 hours. He had already lost his job as a result of his addiction. In another famous case from 2009, a couple from Suwon were so preoccupied with caring for a virtual infant that their real baby died from neglect, for which they were found guilty of negligent homicide.

Though these tragic stories have inspired an outcry from various groups and politicians (the Korean government recently banned anyone aged under 18 from playing online games between midnight and 8am), society at large continues to hold gaming in high esteem. Professional gamers are revered like sportsmen or athletes, with the most successful becoming affluent media celebrities.

Probably the most popular game of all time in Korea is the PC real-time-strategy game, Starcraft. Not long after its release it grew to become the country's "national e-sport," and today there are several television channels dedicated to the game. Starcraft tournaments are often performed in front of live audiences and aired on TV, with its top players garnering dedicated fan bases, professional contracts and large tournament winnings.

A couple of weekends ago, some friends who happen to be Starcraft fans invited me to a tournament final in Seoul. Although I'd never played the game myself, and have never enjoyed real-time-strategy games all that much, I was eager to see a Starcraft tournament because of the game's popularity here. I wanted to see first-hand how a multiplayer gaming tournament would play out in front of a live audience, and how it compared to watching a "normal" spectator sport. Plus, it just sounded so damn irresistibly Korean. 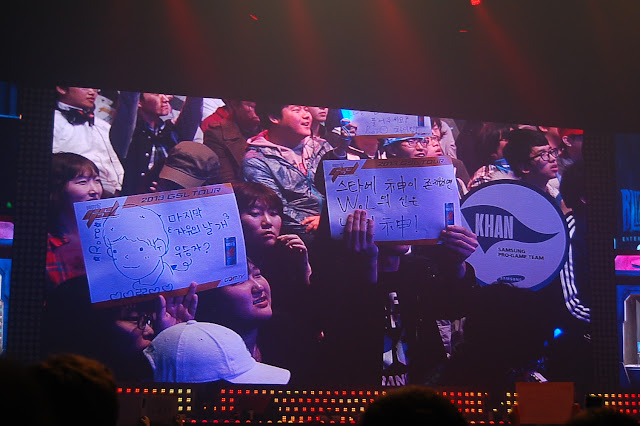 Watching a live Starcraft tournament is, I think, a quintessential Korean experience. Like seeing a Muay Thai boxing match in Bangkok, or a Gaelic football match in Dublin, it reveals a fervent sporting subculture unique to that country. While some (e.g. my girlfriend, Angela) might snort at the sight of exploding CG aliens, and while others may reject Starcraft's status as a national "sport", you can't ignore the passion and dedication that players and fans invest into the game. Both opponents had tears in their eyes at the culmination of the final. Both had proud parents watching them from the audience. And both had their share of fans cheering them on. While I'll never be a Starcraft fan myself, I loved the passion and energy surrounding us, enhanced by the howling and screaming of the overexcited commentators. Confused though I was, I could never claim that I wasn't entertained.

If you're interested in attending a tournament yourself, well...since I acquired my ticket through a friend, I can't help you much. However, I'd recommend checking out a major Starcraft fan messageboard, such as this one, and searching for tournament schedules.